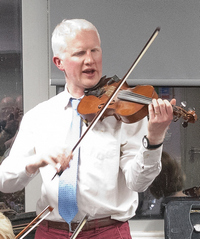 Jamie Smith began playing the violin at the age of 8, having played the piano since he was 6. He holds two all-Britain fleadh titles in senior fiddle and in 2002 reached the finals of the BBC Radio Scotland Young Musician of the Year competition.

His interest in Scottish folk music was sparked when he joined Glasgow Fiddle Workshop himself at age 13 – the organisation was in its early days in the 1990s under Jo Miller and Iain Fraser.

Jamie formed the band Beneche in 2003 and quickly won a Danny Kyle Open Stage Award at Celtic Connections, going on to support The Dubliners.

His solo album in 2006 led him to becoming a regular on both the folk club and festival circuits for over a decade. During this time, based in London, Jamie formed and recorded two albums with London-based Irish band  The Long Notes and recorded an album with Liam O’Sullivan and Steve Byrnes. Touring took him across the UK and Europe.

Jamie has been teaching continuously at Glasgow Folk Music Workshop since 2010 and now balances his musical career with being a full-time History and Modern Studies teacher.