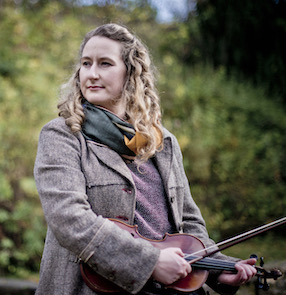 Gillian Frame is a professional Scottish fiddle player and educator based in Glasgow, Scotland.

As a performer she has worked with many acts and was a founding member of the band Back of the Moon with whom she toured for seven years, seeing them win various accolades including Best Up and Coming Act then Best Folk Band at the Scots Trad Music Awards. During this time Gillian graduated with BA (Hons) in Scottish Music from the Royal Scottish Conservatoire of Scotland and was the MG BBC Alba Young Scottish Traditional Musician of the Year in 2001.

Featuring on more than a dozen albums Gillian has worked as a session musician with acts such as The Unusual Suspects, Breabach, Treacherous Orchestra, Rachel Sermanni, Deaf Shepherd, Mairearad and Anna and Duncan Lyall’s ‘Infinite Reflections’.

The list of other freelance work is extensive including working for the Royal Conservatoire of Scotland, Celtic Connections, Fèis Rois, Aberdeen International Youth Festival and most traditional music organisations in Scotland and numerous music camps and festivals throughout North America and Europe including Vancouver, Philadelphia, Calgary, and Lorient .

In 2012 Gillian was awarded Music Tutor of the Year at the Scots Traditional Music Awards and continues to split her time between teaching and performing.

She currently plays with the play with award winning Scottish fiddle band, Rant along with Lauren MacColl, Anna Massie and Bethany Reid.