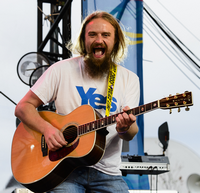 Michael Bryan is a guitarist born in Terre-Haute, Indiana but raised Strathkanaird, seven miles north of Ullapool. His CV reads like a ‘who’s who’ of the top traditional musicians in Scotland, with whom he has recorded and toured for the last 15 years. He has recently been working on an educational project with Glasgow based Bhangra producers 'Tigerstyle' and a collaboration performance of 'Contours of Cairngorm’ by the four National Centres of excellence for music in Scotland, as well as recording and touring with Italian flautist Michel Balatti and pan celtic group ‘The Outside Track’.